In the late 1800’s business was very much conducted within a locality. For us, that locality was Cleckheaton. A small town within the West Riding of Yorkshire.

The town and surrounding areas, known as the Spen Valley, were and indeed still are a big part of the Sugden family’s lives.

Perhaps, as a little marketing gimmick, the Sugden family in those early days had a small wallet sized booklet produced and distributed. Titled, ‘The Album of Cleckheaton Views’ this booklet featured various views from around Cleckheaton and the surrounding areas that showcased the town or had meaning to the Sugden family.

Don’t forget in those days, photographs were not something seen on a daily basis and so this little album would have been a treasured little collection of views for people. 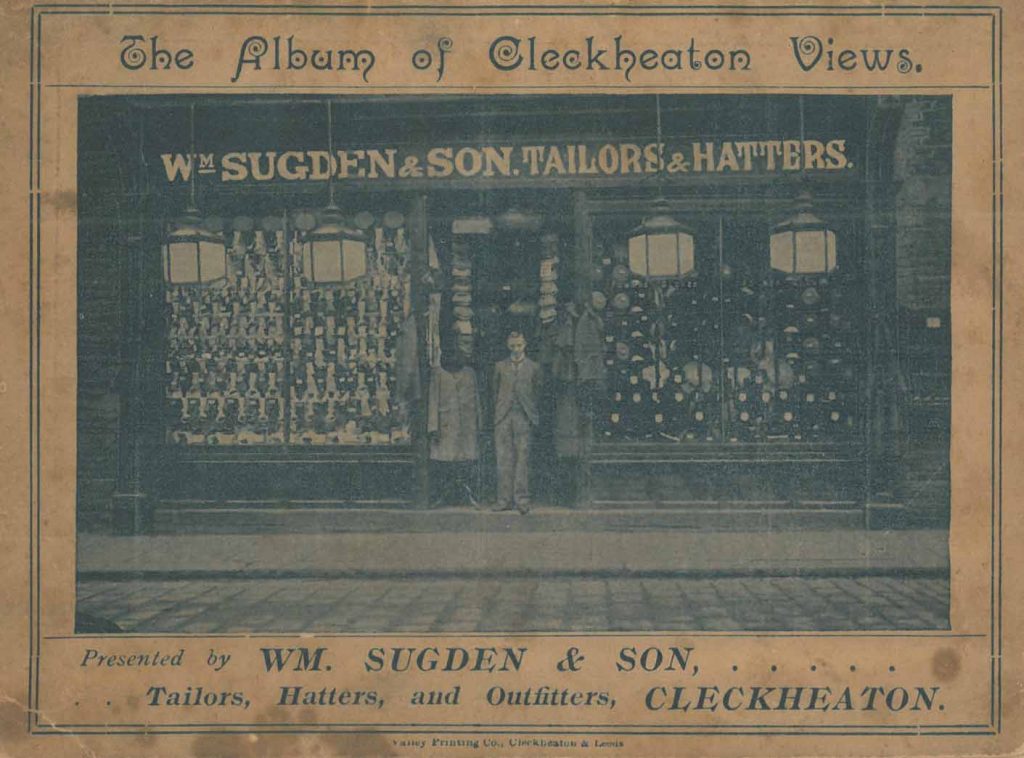 The front cover showcases our original shop on Railway Street. 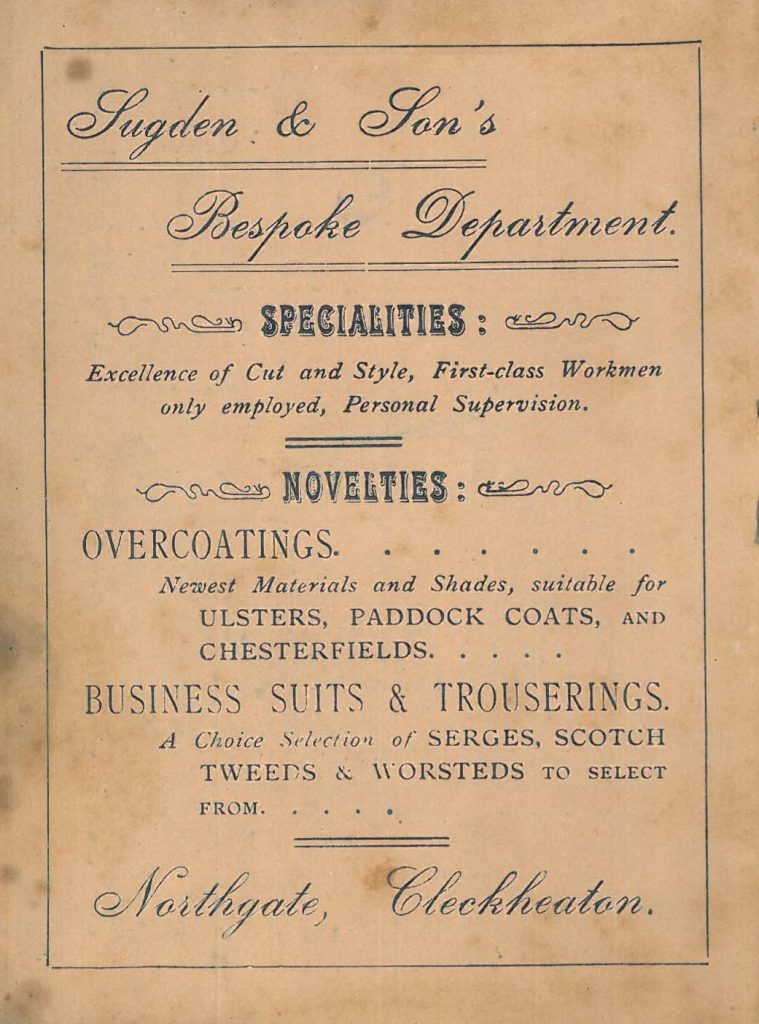 When you open up the album the first inner page features an advertisement for one of our shops. Followed by a view of the Central Chapel in Cleckheaton. 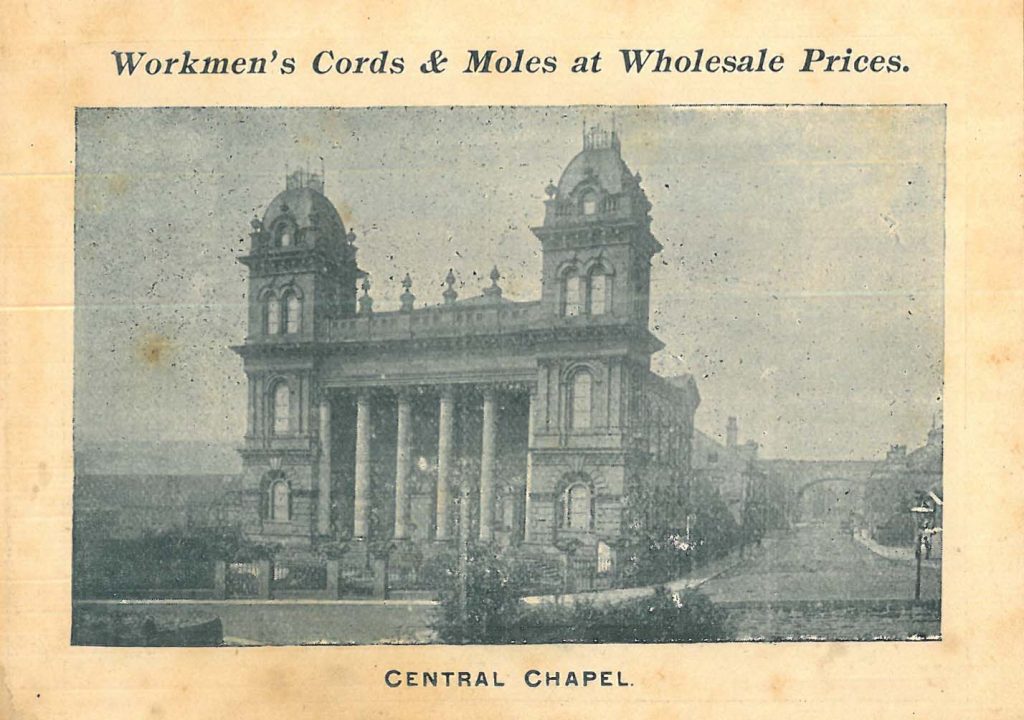 According to local newspaper The Spenborough Guardian, The Central Chapel was designed by local architect Reuben Castle, and opened in 1879. The final cost was £13,000, for a building described as the cathedral of Free Methodism, and more like a town hall than a church. It could seat 1,763 people. By 1889 the debt had been cleared and a new organ was added at the cost of £1,200. The chapel was demolished in the 1960’s. 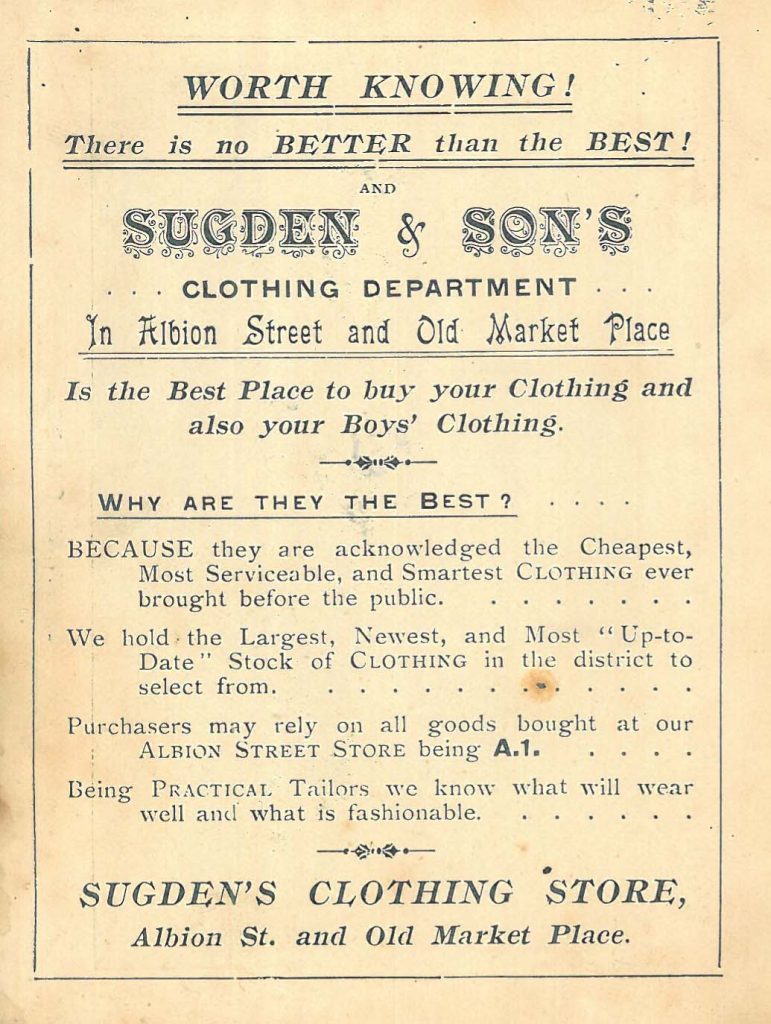 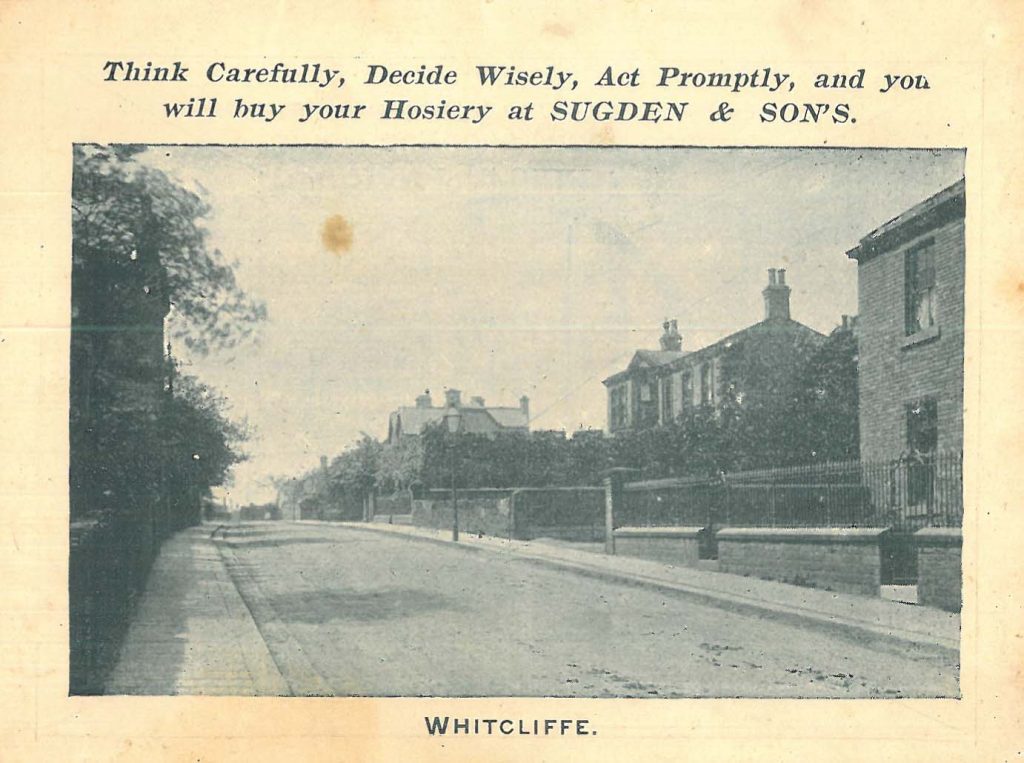 Another ad features overleaf before a view of Whitcliffe, an area that is today one of the main routes through Cleckheaton. 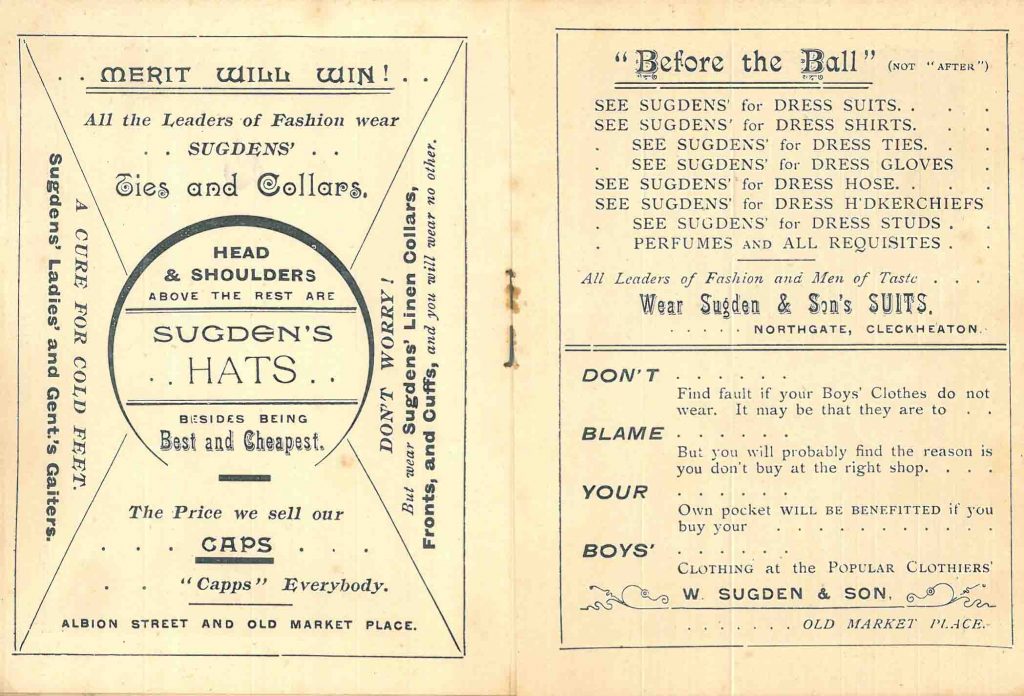 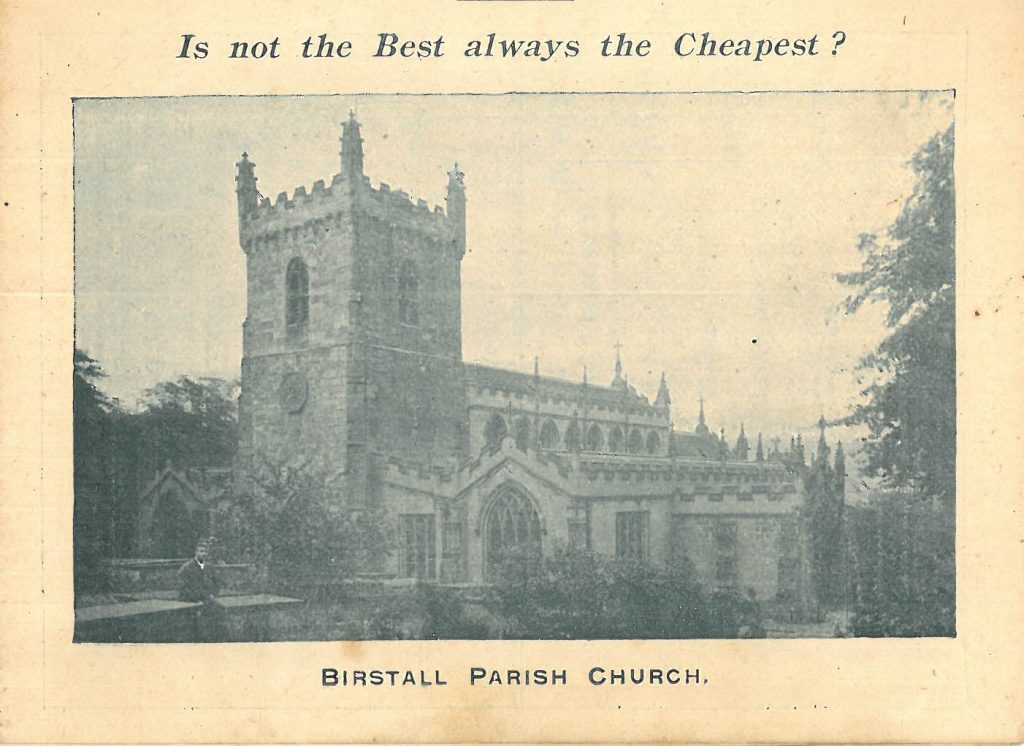 The photograph of the nearby Birstall Parish Church is significant as it was where William Sugden married, in the same year that he founded the business, 1869. 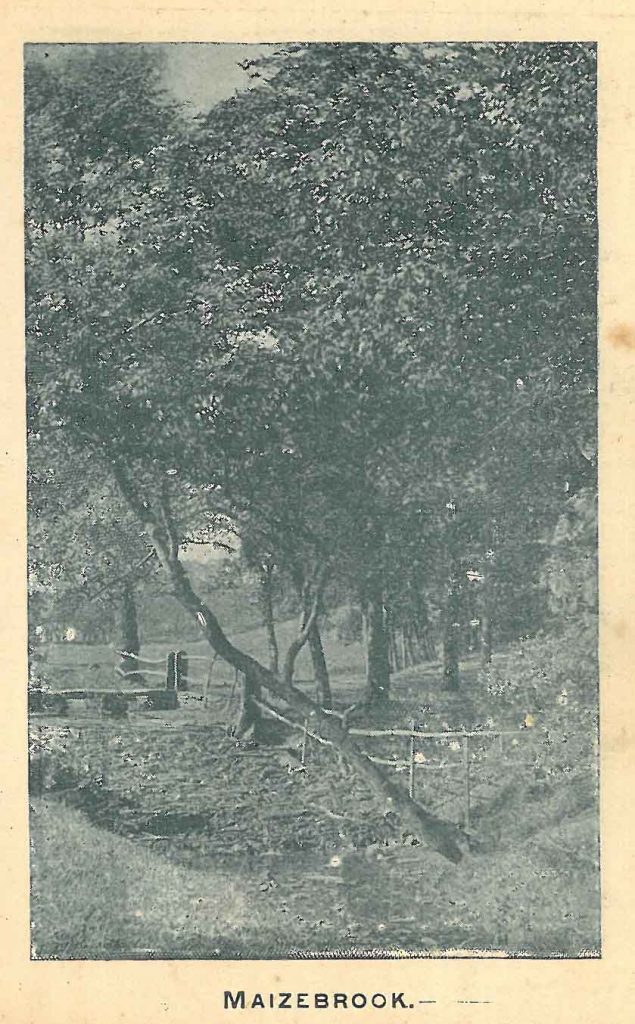 Maizebrook seems to refer to an area surrounding the River Spen in nearby Dewsbury, according to maps of today. There are house available in this area now, so this view is perhaps long since built on. 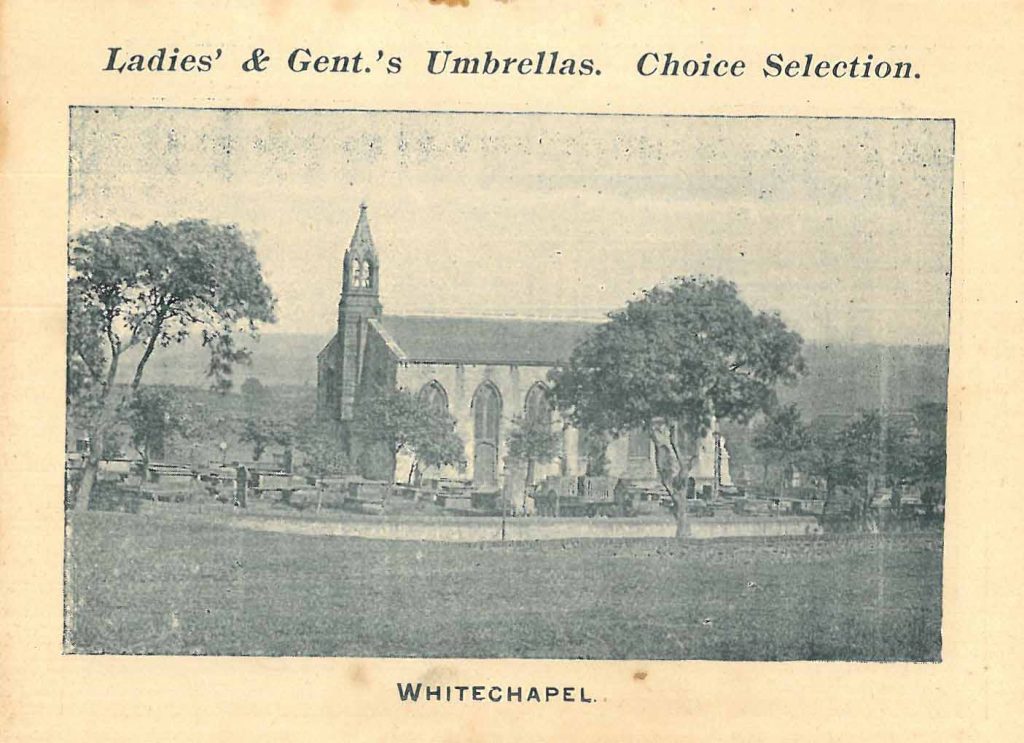 According to Wikipedia, Whitechapel Church was built in 1820 on a site associated with over nine centuries of worship. It has supported Roman Catholic, Protestant, Puritan, Methodist and Anglican worship during its history. Links with this site of worship have been made to the Romans, the Brontës, The Knights Hospitaller, a grave slab of one of the knights being in the entrance to the church, Celtic influences and in recent times the graveyard contains war graves from the world wars. Legend also has it that Robin Hood is connected with this site of worship. 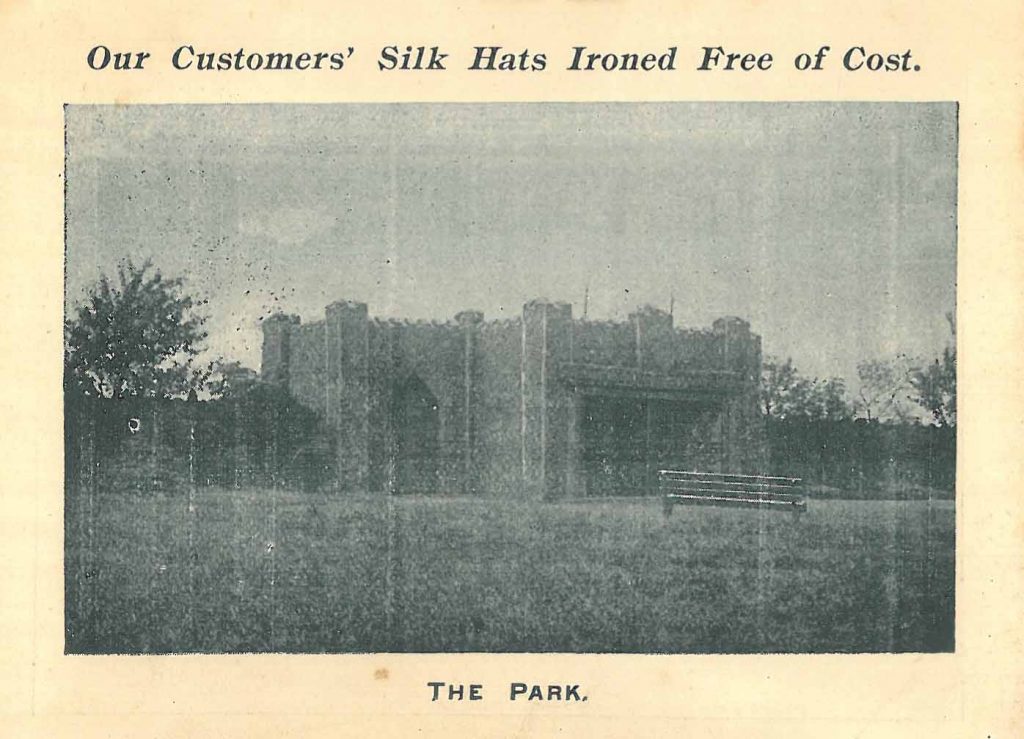 This view simply titled , ‘The Park’ we assume refers to a park in the locality of Cleckheaton or perhaps at nearby Dewsbury. 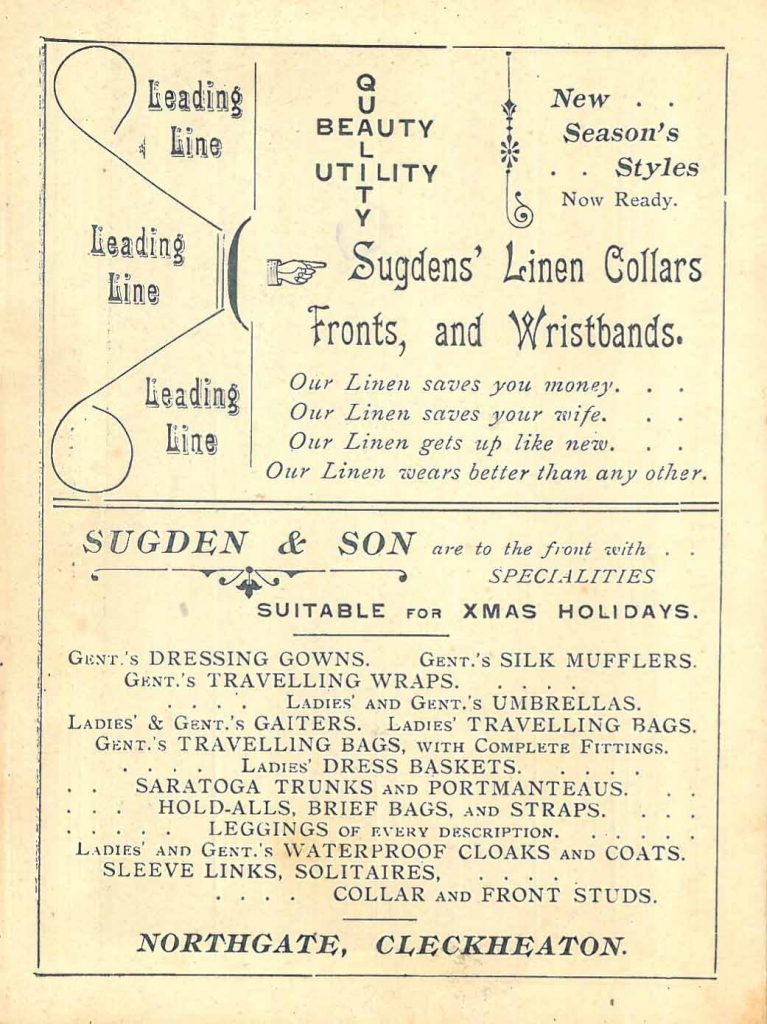 We then reach a page advertising our linen collars, fronts and wristbands along with Christmas specialities including men’s umbrellas. 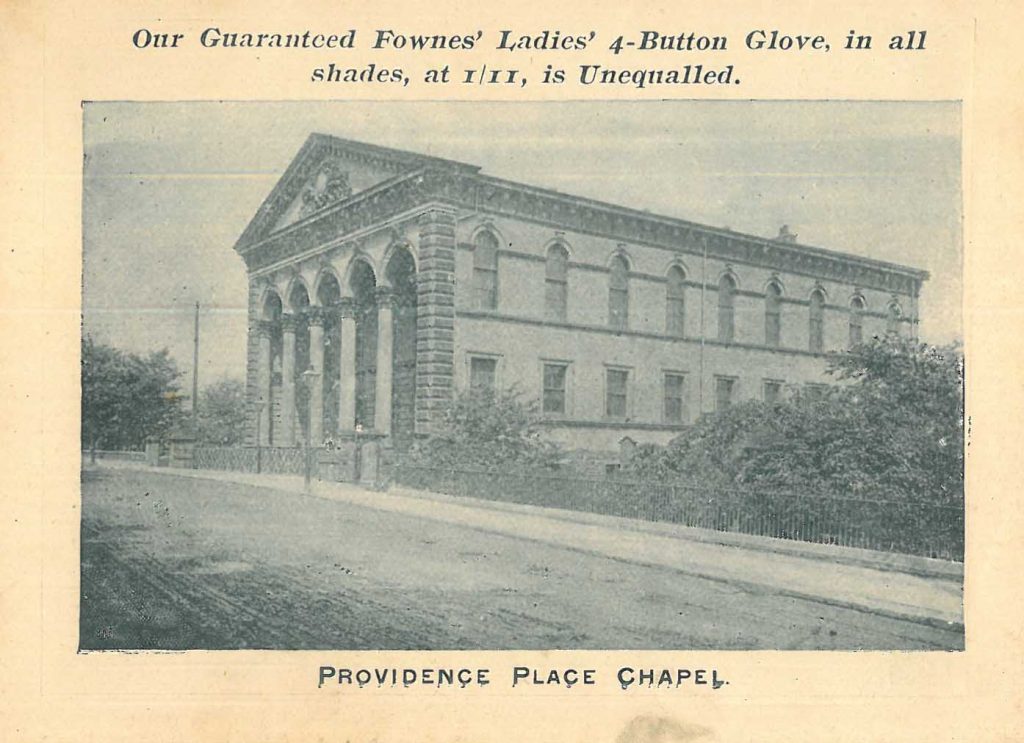 The Grade II listed Providence Place Chapel, built in the 1850’s is now home to the famous curry house, The Aakash Restaurant. A fantastic 750 seater buffet style Indian Restaurant, the building has been lovingly and sensitively restored retaining many of its original features. 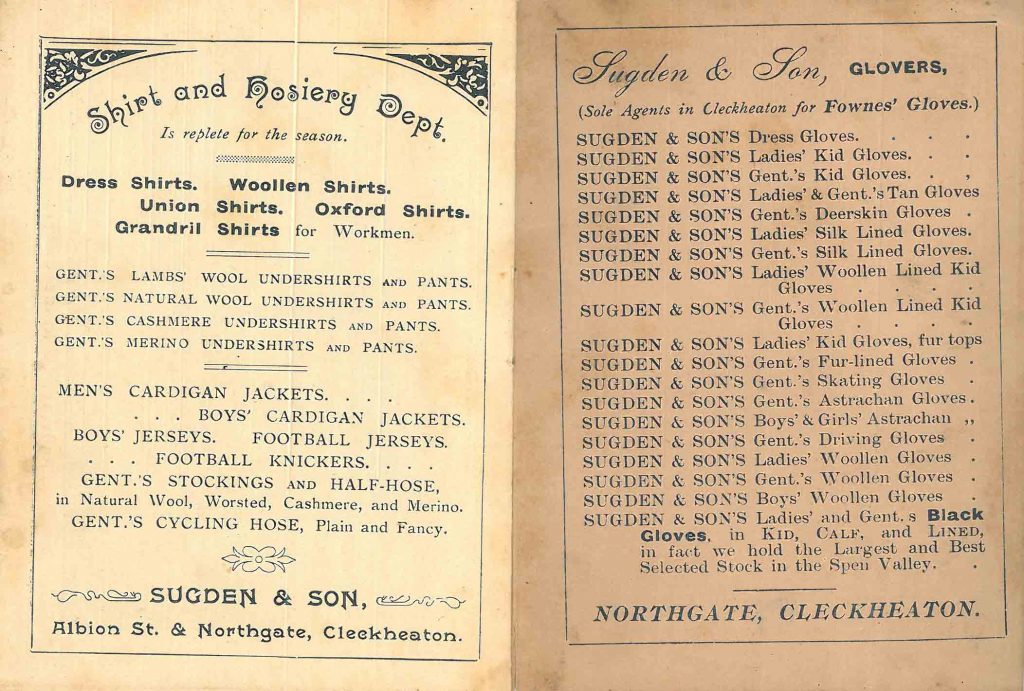 A double page spread of further advertisements features next before the back cover features a view of our shop on the corner of Albion Street and Old Market Place. 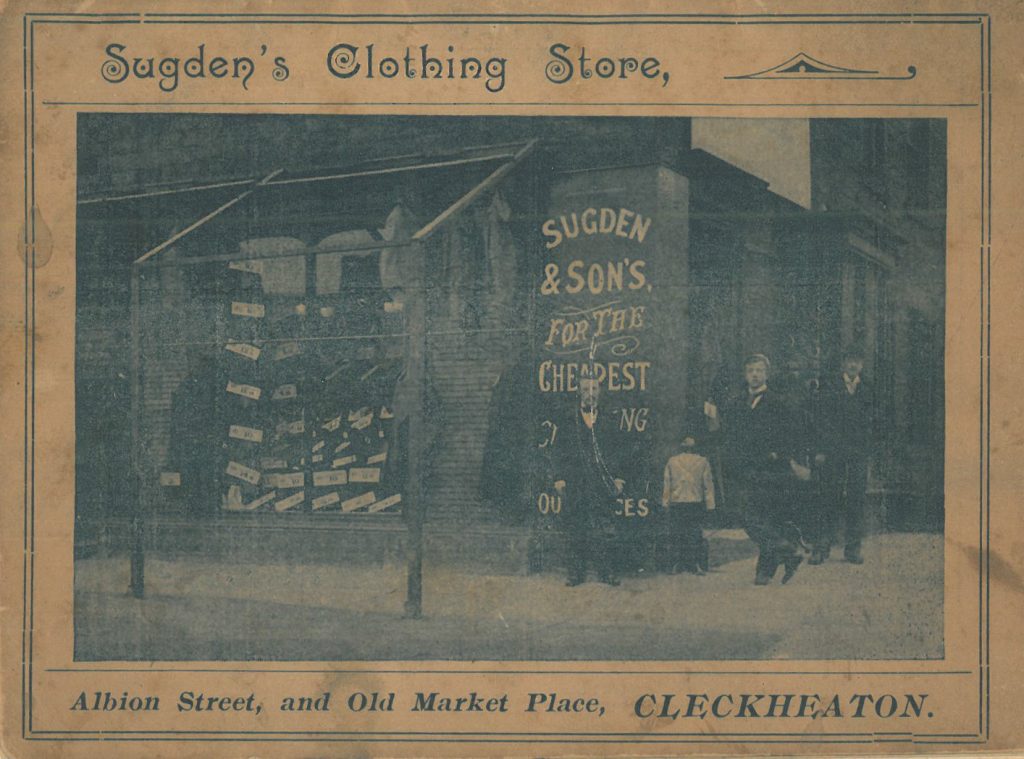