You are on: Home > News & Insights > The Professional Clothing Industry pays us a visit!

The pair, from the magazine of the Professional Clothing Industry, were greeted by Richard Donner, Sugdens Chairman, and his son, John Donner, Managing Director and given a tour of the premises.

It was a chance for Richard Donner to give a tour of the staggering 8 acre site on which sits the Sugdens head office and Warehouse as well as a chance to give an insight into how the company operates.

Always up to date with the latest trends and industry leading technology, Sugdens proudly sits in the top 3 UK businesses when it comes to career and workwear. However, as Richard Donner stated to his visitors, “We tend to keep a low profile”.

Preferring to concentrate on developing its business rather than blowing its own trumpet, you’d be forgiven for thinking that Sugdens had been a little quiet lately. But, as the visitors from Director-e were to find out, things have actually been moving very fast!

Business is divided in three ways: Industrial Companies, Police and Fire Departments, and prominent charities, such as St John Ambulance. In addition to that, the business is broken down into Wholesale, Corporate and Decoration.

“We’ve had a huge slice of the Decoration business for years. It’s more a partnership than a sale” Richard Donner explains.

One of Sugdens’ most noteworthy visitors has been none other than Princess Anne, a visitor on more than one occasion in connection with their work with charities.

Sugdens distributes throughout Europe, Africa, the Middle East and Canada. In partnership with Double TWO, (the shirtmakers who joined forces with Sugdens in 1968) products appear on large retailer websites such as House of Fraser and Debenhams, where Double TWO Shirts sell significantly well.

“The technology side of the business is moving fast,” explained Richard Donner, “Web selling opens up a world of opportunity, but selling with big distributors such as Ebay and Amazon presents pitfalls to individual companies who are increasingly at risk of losing their identities.”

Sugdens instead aim to get more visibility through web selling, but without becoming a commodity.

The company works in countries such as China, Indonesia and Thailand for its manufacturing process, with investment being very much dependant on a country’s financial viability. Prioritising staff welfare, Sugdens actually pays double the minimum wage required to the workers manufacturing the garments and goes above and beyond to ensure their employees enjoy the best pay and safe working conditions at their factories.

“We’d love, as many companies would, to contribute to the industry by prioritising Britain, but unfortunately it is five times more expensive to have the manufacturing process in Britain. But the design, logistics, stocking, distribution and marketing are all based right here in Wakefield. So while a garment is sewn abroad, its origins are very much British.” States Richard Donner

The latest technologies are involved in every process, yet the company always values its employees’ dedication and hard work above anything else.

Richard Donner concluded with a hint at future projects, including expanding the business into India and confirmed that, at the age of 77, he has no plans to retire anytime soon.

As the company also looks ahead to its 150th year, there are no signs of slowing down! 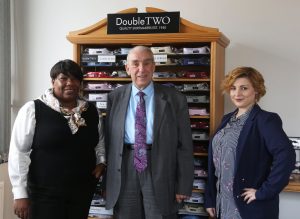